In spring 2019, UW-IT conducted a survey of instructors and students at the University of Washington (UW) to learn about satisfaction levels, impact on teaching and learning, and impediments to using Panopto. This report reviews the survey findings and offers recommendations to improve the Panopto experience at the UW.

Among the positive findings from the 2019 surveys: 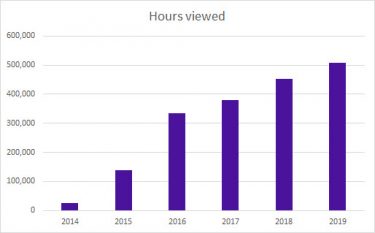 In spring quarter 2019, 142 instructors completed the Panopto Instructor Experience Survey. The survey invitation was sent to 650 instructors who had recorded over one hour of content in the last two quarters. Twenty-two percent of recipients responded. Thirty-five percent of these were from the College of Arts & Sciences, 14% from Engineering, 10% Public Health, and the remainder were from 12 other schools/colleges. Eighty-two percent have used Panopto for two or more quarters. 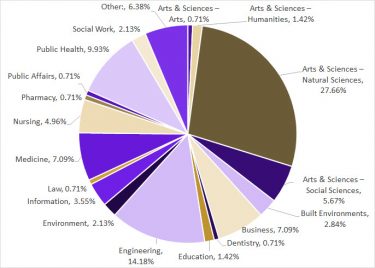 In spring quarter 2019, 6,000 students received invitations to participate in the Panopto Student Experience Survey. The initial response rate was low: only 461 students responded. We then posted the survey invitation in the Canvas Learning Management System. This method drew 1,271 responses, for a total of 1,732 students who completed the survey. All class levels and most schools were well represented. 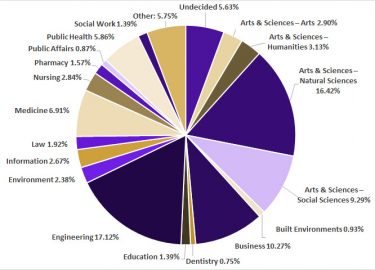 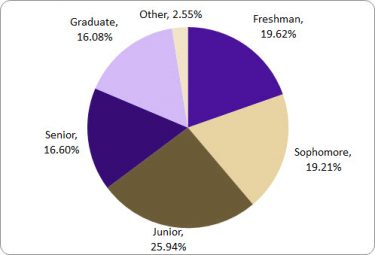 When asked about how they used Panopto for both a specific course and other courses, instructors reported that the most common uses for Panopto on average were:

Only four percent of instructors who responded required  students to create recordings for assignments.

When asked about other uses of Panopto (beyond recording), instructors reported:

When responding to the first set of questions, students were asked to keep one particular course in mind. A majority of students viewed half or more of all the recordings from their course. 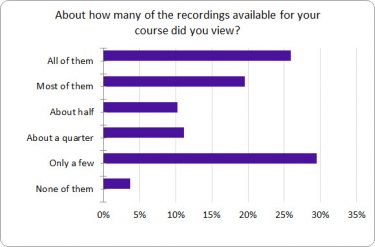 Of the recordings viewed, over half watched the entire recording. 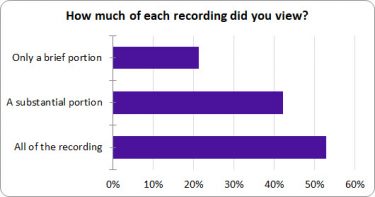 Objectives for viewing recordings vary, but all are aimed at understanding course material better. Many reported studying for an exam (64%), reviewing what they did not understand (62%), or reviewing a missed class (59%). Nearly half take notes within a recording (42%). The UW was closed for several days due to a snowstorm, and 33% reported viewing recordings for cancelled classes. Almost a third use recordings to prepare for a class (30%).

Instructors are availing themselves of UW-IT support. When instructors need help with Panopto, many use UW-IT documentation (52%), use Panopto’s documentation (49%), and send messages to the UW-IT help desk, help@uw.edu (40%). Instructors also report asking a colleague for help (30%). Most students (80%) indicated they did not need help with Panopto. Those who did need help frequently asked people they knew (an instructor, TA, classmate or friend) for assistance.

Most instructors were satisfied with the reliability (85%), ease of use (86%), and function across platforms/devices (84%). One percent reported having problems significant enough that they would not use the service again.

Most instructors (91%, up from 79% in 2016) would recommend Panopto to a colleague who is interested in lecture capture. An additional 6% would recommend it under certain conditions.

Impact on Teaching and Learning

Survey responses indicated that, overall, Panopto has had a positive impact on teaching and learning.

Instructors reported mostly positive changes in their teaching due to Panopto. Some of the most commonly reported changes included:

The majority of student respondents indicated that Panopto has a positive impact on their learning.

When asked if there is anything else students wanted to share about their experiences using Panopto, 237 students wrote in responses.

The survey for instructors included questions about their preferences for receiving communications about Panopto from UW-IT. Seventy-six percent said that their preferred method is to receive an email, and 28% said they view messages in the Canvas banner. Only 14% selected viewing the Panopto banner, and 12% reviewed the IT Connect Updates page.

Although instructors and students find Panopto to be a valuable teaching and learning tool, work remains to narrow the gap between Panopto’s potential and instructor and student usage of the tool.

Several students wrote that they wished instructors would use Panopto more often and would use it better. “Please encourage more instructors to use Panopto, especially for upper level classes. Sure instructors don’t offer Panopto as an incentive for people to attend classes, but with a smaller class size, it’s easy for them to track attendance (and they can also do quiz in PollEverywhere for this purpose). But these upper level classes usually have more challenging content, and instructors’ use of Panopto would allow students to review materials so much more easily.”

“In my opinion having panopto is very nice because it allows for you to catch up on work where you cannot attend lecture, especially for those with course conflicts. It also helps those who are disabled be able to watch lectures from anywhere. For those who don’t use panopto it does not affect them. I feel like panopto can only benefit the student. The only reason panopto could be a detriment is if the student decides to skip classes because of panopto and then doesn’t take the time to fully absorb the information provided by panopto (perhaps watching on 2x speed without fulling [sic] understanding). This, however, is completely the student’s choice and is completely avoidable by a [sic] academically responsible student.”

“Being able to experience a lecture repeatedly, at any time, and at your own speed has immeasurable value. Unfortunately, not all of my instructors have known how to use panopto or have stated they are not willing to be on camera.”

Most instructors were unaware of most of the features available to viewers.

However, over 65% were aware that viewers can download recordings when permitted, view recordings on a mobile device, and vary the playback speed.

Students were also unaware of several of Panopto features.

Most common issues and needs

Students and instructors both identified areas for improvement or needs that were not being met. We have given feedback to Panopto, and some of the issues are currently being addressed.

Students were asked to comment on any major problems they have had with Panopto. Two hundred and ten students wrote about the following challenges in using Panopto:

When asked to describe major problems they had with Panopto, 209 students responded.

Many students like Panopto as a study tool. Some view it as mandatory – they have an expectation that if a lecture isn’t recorded due to a technical glitch like the camera being broken or the microphone not having batteries, that I will redo my entire lecture.

Most instructors and students were satisfied with Panopto. Students see the benefit of Panopto and wish more instructors used it in their courses. Some instructors hesitate to use Panopto because they are concerned about a negative impact on attendance, but most students who reported missing class had legitimate reasons and appreciated the safety net that recorded lecture provides.

Panopto has made a positive impact on teaching and learning at the UW. Instructors are able to cover more content, and students are able to review and learn information that they may not have caught the first time. As challenges are addressed and needs discovered and met, the gap between Panopto’s potential and its actual usage at the UW will continue to narrow.