David Goldstein has taught at UW Bothell for over 13 years, beginning as a part-time instructor, and now as a senior lecturer teaching courses in American and ethnic studies, film, and literature as part of the Interdisciplinary Arts & Sciences program (UW Bothell’s largest upper-division academic program). However, David’s primary responsibilities currently have him helping other instructors learn how to teach.

Hybrid Courses: The Best of Both Worlds

In his role as Director of the Teaching & Learning Center (the home for faculty development at UW Bothell), David helps teachers learn how to use classroom and course technologies. His recent focus has been technologies that support hybrid courses – courses that are 30 to 70 percent online.

Hybrid courses are particularly appropriate at UW Bothell for several reasons. The first is space. According to David, “UW Bothell is the fastest growing 4-year campus in the state of Washington. We’re running out of classroom space.” Because classes at UW Bothell typically meet twice a week (Monday and Wednesday or Tuesday and Thursday), “hybrid courses would allow us to double the capacity of each classroom.” The second reason for promoting hybrid courses is that the majority of the UW Bothell student population are commuters, who prefer not to have to come to campus every day.

Why not simply offer distance learning courses? “We’ve talked about offering total distance learning courses, and that may happen at some point in the future. However, one defining characteristic of UW Bothell is the strong relationship between faculty and students, which has been fostered through close contact. We want to maintain that aspect of the UW Bothell’s experience.”

More critical than the above reasons is the fact that hybrid courses make good pedagogical sense. Published research shows that blended learning, if done well, can be more effective than courses that are offered only in a classroom. For instance, students who may be reticent in class will typically participate more readily in an online discussion. David believes that hybrid courses can be “the best of both worlds, if done well.”

“But they do need to be designed well,” he notes. Which is why, for ten weeks during the autumn of 2010, he and a group of UW Bothell faculty (Carol Leppa, in the Nursing 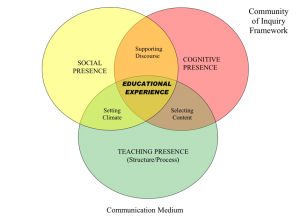 Ten of the eleven participants designed a hybrid course, which they then offered in Winter or Spring Quarter 2011. In the process of developing that course, teachers learned to evaluate which course elements work well online, and which work best in a classroom. The above diagram shows the concepts that influenced the Institute design. “This idea helped us articulate how the learner’s experience in a hybrid course can be augmented through, essentially, a sense of belonging to a community of learners, which has three dimensions.”

One advantage of hybrid courses is the opportunity for the instructor to create learning objects that can be used in every course. For instance, David is creating a tutorial for students about academic integrity by using Jing, or narrated PowerPoint slides (a technique he shared in the Hybrid Course Development Institute). It’s a piece of content that is relevant for all students in all courses, so he can use it multiple times without having to recreate it every term. He can also put the tutorial online and have students review it outside of class time.

As when teaching how to create reusable learning objects, some of David’s instruction focuses on the technology itself. For example, he might help instructors get comfortable with clicker response systems. But the emphasis is always on technology in service of a pedagogical goal, how to use technology to foster student learning. “A lot of what we talk about has nothing to do with technology per se. It’s nuts and bolts classroom teaching, what kind of assignments foster the deepest learning, how to get the most out of classroom discussions, how do you get students to collaborate, how do you teach them to collaborate.”

WebQ: Support for Collaboration and Accountability

One way that David has been able to increase student collaboration is to use Catalyst WebQ. “I use WebQ for having students evaluate each other as small group members. WebQ is very easy for students to use. It provides confidential feedback to me that I can use (in addition to students’ self evaluations and my own observations) to assess their participation and contribution. Research shows that students typically don’t like working in groups, because of a lack of accountability. Some students may end up carrying the load for the entire group. Having them evaluate one another is one way to make everyone accountable. Now [using WebQ], I get very few complaints about working in groups.”

Technology has also helped to raise the level of honest discussion students are willing to engage in class. David likes classroom response systems, also known as clickers, for two reasons. “First, they give me instant feedback, help me know whether students are getting what I’m talking about. But they are most useful when talking about sensitive issues.”

Clickers allow David to poll students about their opinions and attitudes, and students can respond anonymously using their clickers. “I use them in classes that include sensitive subject matter, where discussions may touch on subjects of race, religion, sexual orientation.”

When asked whether in-class polling ever leads to students self censoring, David explained that by using Turning Technologies in conjunction with PowerPoint, responses can be concealed until everyone has responded. Questions often take the form of Likert statements. A typical question that he might ask in the first day of a class on Queer Cinema might be: “I’m concerned that this class will be an exercise in political correctness.” Or, “I consider myself a religious person.” Students then choose from a list of responses: Strongly Agree, Agree, Neutral, Disagree, Strongly Disagree. David’s intention with these questions is to expand the dialogue by surfacing ideas and feelings that often remain unspoken.

“The responses provide a snapshot of who’s in class, and are the starting point for a more honest discussion because you’re able to get a diversity of points of view. It reduces guessing on the part of the student and helps students to know who they’re in class with.” That information provides the basis for greater respect and greater risk taking among students.

Through hybrid courses and the use of pedagogically-effective technologies, David has created more opportunity for student involvement and fostered open student dialogue. All of these efforts, he says, are tied together by a single principle: students learn from one another as well as from the professor. “I bring one kind of specialized expertise to the classroom,” he says, “but each student also brings a unique set of life experiences and perspectives. It would be a shame not to capitalize on all of that collective wisdom.”